Posted on January 9, 2015 by roxburycommunitycollege

Governor-elect Charlie Baker came straight to Roxbury right after he was sworn in as the 72nd Governor of Massachusetts. Governor Baker and Lt. Governor Karyn Polito made their way to The Dudley Street Neighborhood Initiative (DSNI) in the KROC Center yesterday afternoon. They were welcomed by a room full of politicians, community activists, organizational leaders and local residents. Among those in attendance were our very own RCC President Dr. Valerie Roberson and Vice President Lorita Williams.

The event began with Governor Baker learning a bit more about the Roxbury community and discussing how he will connect with successful Roxbury organizations to create a more vibrant and robust Dudley neighborhood. Upon entering the building, Governor Baker was greeted with chocolate covered strawberries created by the students in the KROC Center’s Culinary Program. Governor Baker enjoyed the chocolate treat before making his way to the podium to hear a few success stories of DSNI residents.

One particular story stood out from the rest and it came from 3rd grader Makya Giaff, who is currently teaching her little sister “easy math”. She stole the hearts of the audience and charged Governor Baker with the task of providing her with a safe environment to thrive in and become successful. 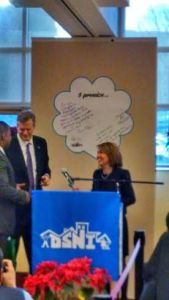 Governor Baker and Lt. Governor Karyn Polito both shared encouraging remarks and expressed their enthusiasm to work with DSNI Executive Director Christopher Jones to replicate the successful model around the Commonwealth.

RCC is excited about the future of our Commonwealth. We all must stay focused, try our best to achieve our collective goals and be mindful of how our actions impact others. Best of luck leading our Commonwealth, Governor-elect Baker!

This entry was posted in Uncategorized. Bookmark the permalink.